skip to main | skip to sidebar

The Droid and the Bounty Hunter 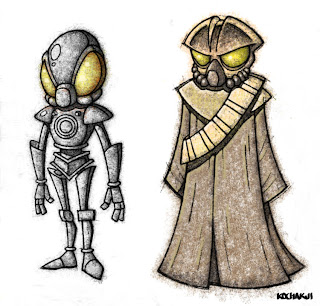 Apparently yesterday was Star Wars day. When I was at Cartoon Network, we heard their was a Star Wars show in development, so I did a bunch of designs of some of my favorite characters. The guy on the right is 4-LOM. He's a bounty hunter. The guy on the left is a protocol droid of some sort. He was a captive of the jawas in the original Star Wars. If anyone remembers his name, help a brother out. He was one of my favorite action figures as a kid.
Posted by Patrick Kochakji at 8:52 AM